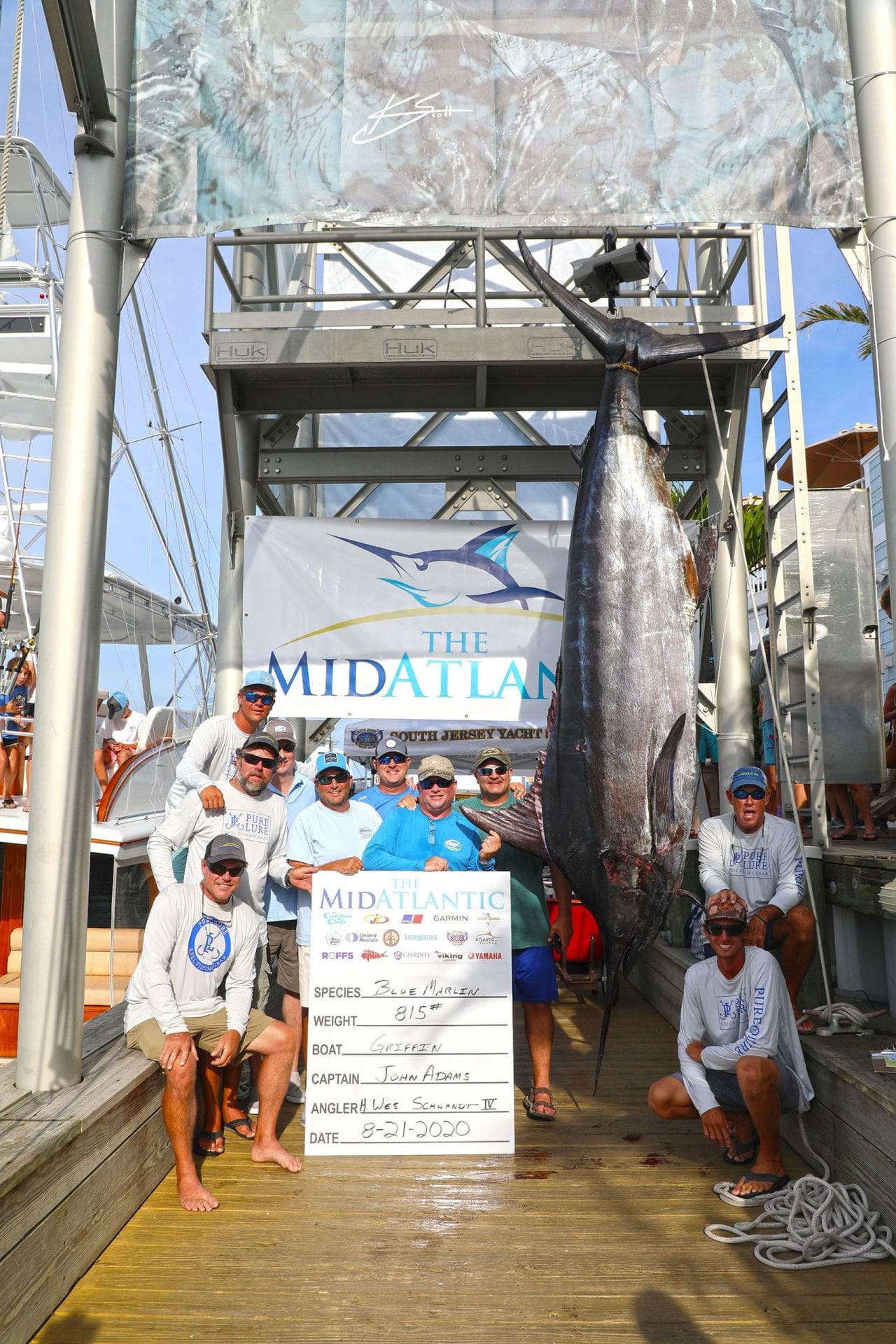 The final day of the 2020 MidAtlantic dawned sunny though a light breeze kept temperatures cool as the 163 boats headed out on Day Five into calm seas offshore. With a 91-pound white marlin leading the category, admittedly everyone in the tournament acknowledged that number would be hard to beat. In the tournament’s 29-year history only five white marlin over 90 pounds had ever been weighed. However, with second and third place set at 77 and 70 pounds respectively going into the final day there was a chance they could be topped. The blue marlin category was still anyone’s to win since the 489-pound leader was the only qualifying blue to be weighed through four days of the tournament. With a tournament record cash purse of $4,074,430 up for grabs, there were still several other categories in reach. Worthy of mentioning is cash prize awards are based on level of calcutta participation so there will be a notable difference in payouts between fish in each category.

Day Five saw the billfish bite turn on and numerous boats had multiple releases and several large white marlin were brought to the scales. The tuna bite also continued and while big eyes remained scarce, yellowfins were plentiful for those focused on that category. Quite a few dolphin were also weighed, though wahoo remained scarce. However, the story of the day came in the blue marlin category, at what a tale it is! Day Five once again lived up to its “Moving Day” reputation, a phrase first coined by the MidAtlantic years ago because of the significant changes to the leaderboard that have occurred over the years on the final day of the tournament. MidAtlantic tournament staff went to work right away at Canyon Club Resort Marina in Cape May, New Jersey and Sunset Marina in Ocean City, Maryland when the scales opened at 5 p.m. and kept busy all night right up to the 9 p.m. closing.

The weigh-in session on Day Five got off to a fast start as John Adams of Juno Beach, Florida had been waiting at the Sunset Marina scale since 2:30 p.m. aboard Griffin with a blue marlin angler Wes Swandt IV had battled. The marlin stretched the tape measure to 126½ inches and had a lot of girth to her as well. It took plenty of muscle for tournament staff at the weigh station to heft the huge blue marlin from the boat to the dock but once set on the scale Weighmaster Frank Ingram yelled out the weight of 815 pounds to put Griffin into the lead in the category!

However, there was rumor of another big blue marlin on its way to the scale at Canyon Club Resort Marina and while radio chatter was quiet about the length, the word was out it was definitely a good fish. It was just after 5:30 p.m. when Captain Mike Adkins backed the Is That So for owner Ryan Putman of Doylestown, Pennsylvania to the scale and the size of the blue marlin was finally revealed. Adkin’s, a seasoned tournament skipper, has seen and caught plenty of big blue marlin over his career and knew this girl would be a contender judging by its length and girth but stayed mum about its size during the day. Here too, tournament staffed worked feverishly to safely remove the huge marlin from Is That So and place her on the dock. The tape measure was laid out and amazingly the length was noted at 126¼ inches, a scant ¼-inch shorter than Griffin’s blue marlin. The rope was placed around the tail and the marlin was hefted to the scale. Putman, who was the angler and fought the fish for well over four hours, and the crew of Is That So anxiously stood by and held their collective breath. Moments later Weighmaster Chris Booth yelled out the weight of 803 pounds and the crew celebrated as Is That So moved into second place in the category. Amazingly only ¼-inch and 12 pounds separated the heaviest and second heaviest blue marlin in the tournament. Worthy of note, in the tournament’s 29-year history the only other blue marlin over 800 pounds was the tournament record 847 pounder caught aboard Wade Lober’s Why Knot in 2014. The two big blue marlin rocked the final standings in the category and in the end John Adams’ Griffin took home a tournament record payout for blue marlin of $692,764 for their 815 pounder while Ryan Putman’s Is That So was second at 803 pounds and won $177,352. Third heaviest blue marlin went to Joe Kelly of Holland, Pennsylvania with the 489-pounder he weighed on Day Four and he won $110,772.

The white marlin category also saw changes to the leaderboard as several were weighed to shake up the top three overall positions in the tournament as well as the top three port winners. The biggest move of the day came from the crew of Greenville, Delaware’s Todd Willard on his Fish On with Captain Andrew Dotterweich at the wheel after they weighed a white marlin of 77 pounds for angler Josh Jasper and moved into a tie for second place in the category. Fort Lauderdale, Florida’s Brooks Smith aboard his Uno Mas weighed a 76-pound white marlin on Day Five for angler Eric Rojas but was bumped off the leaderboard. Final standings in the white marlin category show Bill Keller of Ellicott City, Maryland aboard his Blood Money the clear winner of the heaviest white marlin prize with his 91-pounder caught on Day Four and he received $267,085. The tie for second place at 77 pounds awarded Doug Allen of North Cape May, New Jersey aboard his Big Oil $538,557 while Willard’s Fish On won $523,987.

There were plenty of tuna weighed on Day Five but finding one to make the board with the third heaviest set at 129 pounds going into the final day was going to be a task. However, it was no surprise when Jupiter, Florida’s Mike Yocco aboard his MJ’s brought another large big eye to the scale at Canyon Club Resort Marina. Yocco was already sitting atop the tuna category with his 189-pounder weighed on Day Two but this indeed would be Yocco’s category this year as his second big eye of the tournament tipped the scales at 195 pounds, this one caught by angler Brandon Kape, and jumped to the top of the pack. No other tuna weighed on Day Five would have an impact on the leaderboard and the final standing have Yocco’s 195 pounder and 189 pounder taking first and second place and a combined payout of $913,883, a tournament record payout for tuna! Summit, New Jersey’s Bob Hugin aboard his The Right Place finished in third place with his 168-pound big eye caught on Day Three and received $147,235.

Numerous dolphin were weighed on Day Five though only one had an impact on the standings. Joe Ward of Westchester, Pennsylvania aboard his Fishbone weighed a 33-pounder and moved into a tie for second place.

Gaithersburg, Maryland’s Judith Duffie aboard Billfisher took the top prize with a 46-pounder and received $100,345. Steve Summers of Potomac, Maryland aboard his Christine Marie and Ward’s Fishbone tied for second place and each received $22,983 for their 33-pounders.

There was only one wahoo weighed in the tournament but it was worth a pile of cash. Marlboro, New Jersey’s Deane Lambros aboard Canyon Runner swept the top three places in the category and walked away with $135,736 for his 42-pounder weighed on Day Three.

During the evening’s award presentation, which were held in compliance with all local, state and federal policies in place due to the current pandemic, a tournament record cash purse of $4,074,430 was handed out. In all, 11 winners received checks of six figures or more including Mike Yocco’s MJ’s tournament record payout of $913,883. Additionally, eight other winners received payouts of $20,000 or more.

The following received calcutta winnings for various positions on the leaderboard during the tournament: