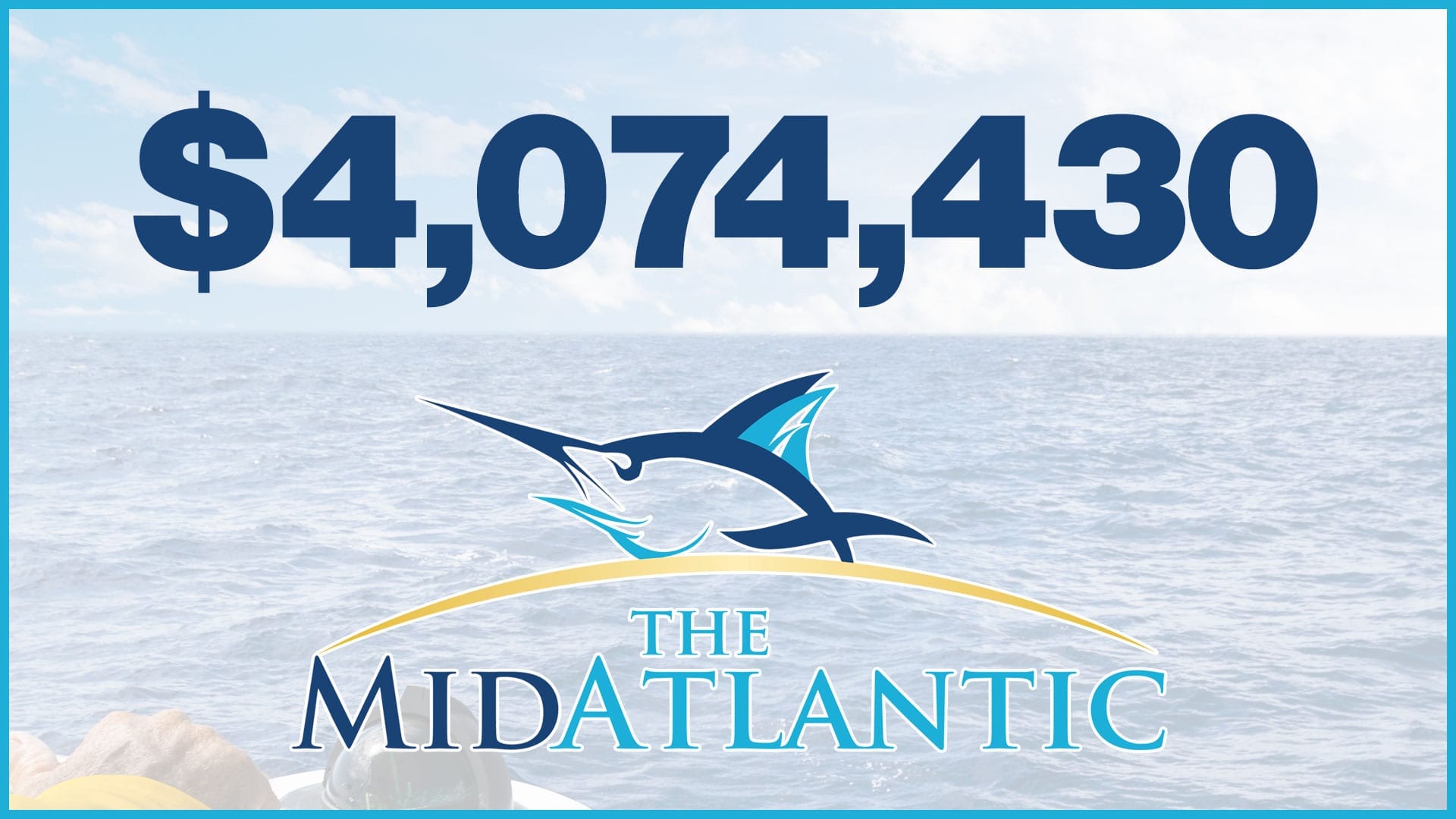 Records Smashed For Participants and Cash Purse as Fishing Gets Underway at The MidAtlantic!

Two tournament records were set before the first line was put in the water today as the 2020 MidAtlantic tournament got off to an incredible start. A tournament record 183 boats make up the field for this year’s event breaking the previous record of 176 boats set back in 2006. Additionally, after a late night of tabulating entries and totaling up calcutta figures the tournament’s cash purse is set at $4,074,430, blowing away the previous record of just over $3.52 million set last year!

While rain and wind covered both of the tournament venues in Cape May, New Jersey and Ocean City, Maryland on Sunday, by early evening clouds had cleared though a stiff breeze was slow to disappear. Additionally, the coveted satellite imagery of sea surface temperatures which most of the fleet utilize to help determine the prime fishing locations were inconclusive due to cloud cover during the day on Sunday. As a result, only two boats, one from each port, gave it a go on Day One of sportfishing’s “Main Event.” The only news of the day came from Ocean City where Don Downs of Milford, Delaware aboard his Game On weighed a dolphin of seven pounds to take the early lead in the heaviest dolphin category. Game On also released two white marlin on the day.

All other categories in the tournament remain vacant. As the weather is set to improve over the remainder of the week, nearly the entire tournament fleet will be selecting three of the next four days to battle it out and search for a lottery-like payday!

Please note the MidAtlantic tournament is a private event. Nightly weigh-in sessions at Canyon Club Resort Marina and Sunset Marina as well as other tournament venues are not open to the general public and require credentials for entry. All local, state and federal procedures with regard to Covid-19 are being followed to ensure the health and safety of all tournament staff, sponsors and participants.

For further information contact Tournament Director Aaron Hoffman at 609-884-0177. Be sure to visit the tournament’s official web site at www.themidatlantic.com where you’ll find all the facts, figures and information about the 2020 MidAtlantic including a complete rundown of calcutta payouts, rules, points, tournament records and an event schedule. You’ll also find a link to purchase official tournament merchandise. Additionally, each night you can follow the weigh-in session with live video feed from both marinas via a link on the tournament’s web site. You can also follow all the action on Facebook at The MidAtlantic Tournament; on Twitter; @midatl and on Instagram; @themidatlantictournament.

Billfish Bite Bounces Back on Day Three of the 2020 MidAtlantic