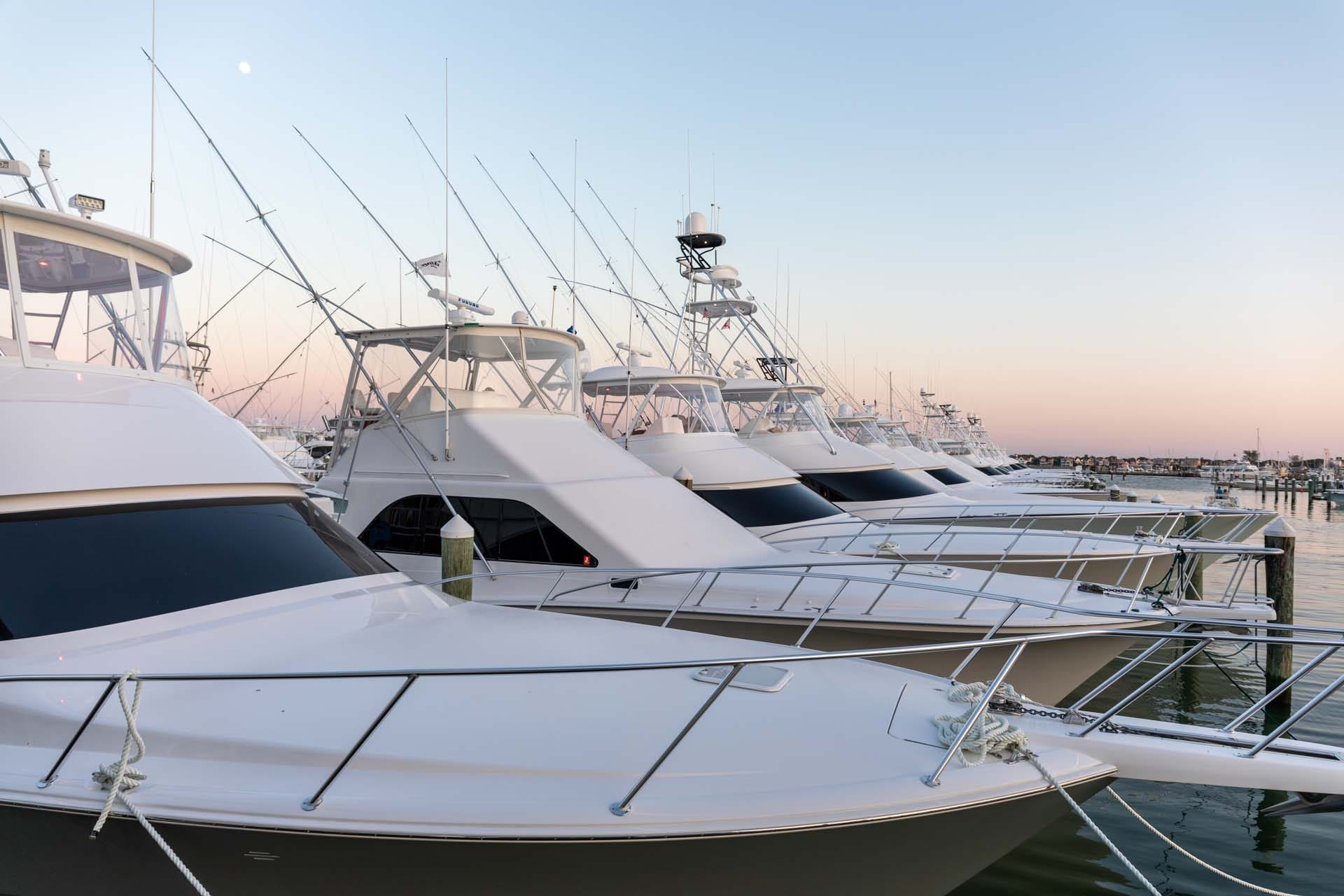 What has evolved from a fishing tournament into more of a boating rendezvous with some fishing thrown in, the Third Annual South Jersey Yacht Sales Offshore Showdown attracted families and friends to the beautiful Canyon Club Resort Marina in Cape May, New Jersey for three days of hospitality, fishing and just plain fun. The event kicked off with a Captain’s Meeting where mounds of clams, shrimp and crab fingers as well as a few cocktails were consumed as old friendships were reunited and new acquaintances were made. George Robinson III, President of South Jersey Yacht Sales, along with his staff worked diligently to put together a schedule of events and dockside hospitality that was sure to please crewmembers of all ages. Two days of fishing were broken up by a relaxing Lay Day where participants could partake in fun-filled dockside activities or simply stretch out by the beautiful infinity edged pool at Canyon Club Resort Marina.

The offshore weather forecast was perfect and the fishing wasn’t too bad either as numerous billfish were caught by the tournament fleet. In the end it was Team Viking edging out Team Ocean by a score of 1200 to 1037. Leading Team Viking was Mount Laurel, New Jersey’s David Johnson aboard his JT which tallied 300 points thanks to a blue marlin released by his son Tanner Johnson. Other boats contributing to Team Viking’s winning total included Wayne, Pennsylvania’s Martin Judge aboard his Judge, and Dave Anderson of Palm Beach Gardens, Florida aboard his Kray Salts who each released three white marlin. Michael Rich’s Business of Orwigsburg, Pennsylvania released two white marlin while George Robinson III’s Polarizer from Cape May, New Jersey released one white marlin to round out the top five point winners for Team Viking.

The top three point winners in the boat category for both white marlin and blue marlin all tallied 300 points each and all ties were broken by time of catch. The Most Points White Marlin award went to Dave Anderson’s Krazy Salts followed by Jamie Diller’s Canyon Lady from Stone Harbor, New Jersey in second place while Martin Judge’s Judge finished in third place. The Most Points Blue Marlin winner was Clarksboro, New Jersey’s Gary Townsend aboard his Lori T followed by Terry Ives of King of Prussia, Pennsylvania aboard his Baroness in second place with David Johnson’s JT finishing third.

Joe Napolitan of Holland, Pennsylvania on his Naps V took the Most Points Tuna category with 37 points. Baroness won the Most Points Overall with 400 points followed by Lori T and JT, each with 300 points. Here too, ties were broken on time of catch.

In the Angler categories Joe Napolitan took the Heaviest Tuna prize with his 37-pounder on his Naps V while the Heaviest Dolphin category saw a tie between Mitch Hand on Judge and Matt Lopez on Business as each caught 15 pounders. No wahoo were weighed. The Most Points Blue Marlin angler award went to Gary Townsend on his Lori T while Michael Stewart nabbed the Most Points White Marlin prize aboard Judge. Townsend also took the Top Male Angler while Stewart won the Top Male Junior Angler. Top Female Junior Angler went to Moorestown, New Jersey’s Asha Chakrabarti on Good Chemistry.

Showdown participants enjoyed not only beautiful weather and good fishing but were kept entertained dockside as well. As noted earlier the Lay Day dockside party featured a barbecue provided by Salt Water Café around the Canyon Club Resort Marina pool. The afternoon featured a Scavenger

Hunt/Poker Run in Cape May where participants visited several adult beverage establishments and were given poker cards. As they traveled aboard a Cape May Trolley they noted landmarks along the way for the Scavenger Hunt. Mario Cesarini and his family on the Gypsea won the Poker Run with a pair of 10’s and Ace card high while the Chakrabarti family on Good Chemistry won the Scavenger Hunt by successfully finding all 30 items. Nightly beverages and hospitality included a buffet by Spanky’s BBQ while the awards ceremony featured the renowned lobster buffet by the Lobster House.

Looking back, George Robinson III, President of South Jersey Yacht Sales, was pleased with this year’s showdown. “We’re grateful for the continued support of our tournament’s sponsors because they make this event possible,” he noted adding his team strives to put on a Showdown that’s family oriented. “Sure it’s great to go fishing but that’s not all this event’s about. We enjoy providing an opportunity for our customers, guests and friends to get together and enjoy a few days of relaxation, fun and a lot of laughs at one of the best locations to bring your family on the Jersey Shore. If we succeed at that we’ve done a good job. Catching a few marlin is icing on the cake!”