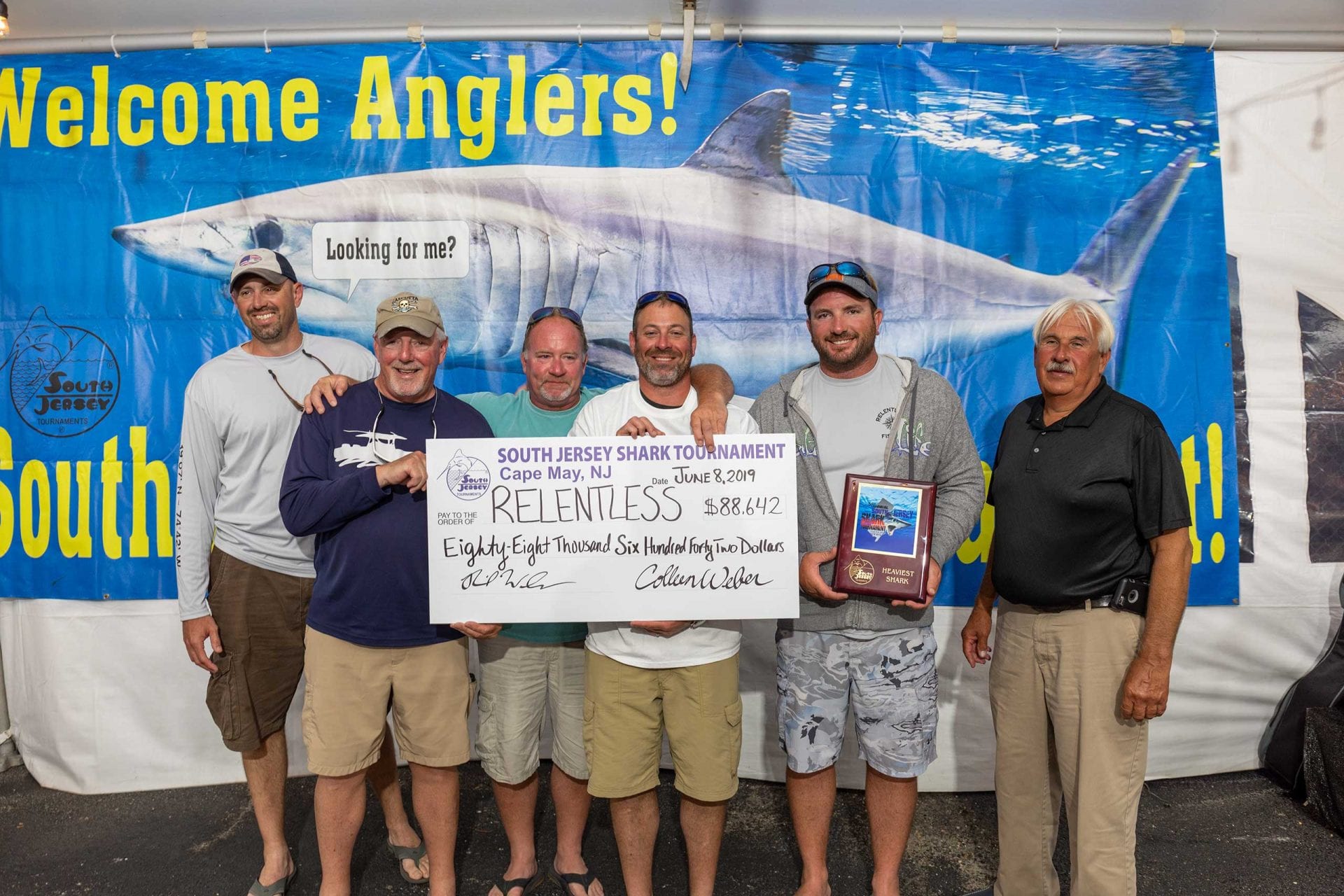 The weather wasn’t in favor of the 39th Annual South Jersey Shark Tournament as the Captains Meeting started off with a front coming through. While the forecast over the fish days seemed to put a damper on this year’s attendance the smaller, but enthusiastic fleet were rewarded with plenty of bites.

At first, Day One looked to be the less favorable of the three fish days. With only 6 boats deciding to utilize the breeze to their advantage, they found that the seas turned out to be one of the better options. Those 6 boats had plenty of action throughout the day releasing makos, blue sharks, hammerheads, tiger and dusky sharks. Kyle Denny and the anglers of the 38 Special took an early lead on mako release points with a total of 3 fought throughout the day, while the reels on the Saltlick were cranking all day with a total of 9 released sharks including two smaller makos. While they did manage to boat a possible contending blue shark, it ultimately would not make qualifying weight which left them itching to get back out on the water the following day.

Day Two was the big day when all 47 boats broke the inlet for the fishing grounds. Once again the fleet found the fishy water and within 18 minutes of lines in Garrett Foster on the Jiggle It was the first hook up of the day and after that it was game on. We saw plenty of releases throughout the day. Saltlick was busy once again with 9 releases including a mako but Warden Pass took the lead with 10 releases, 5 of which were makos. Francesca Rose, Castaway, and Saltick all came to the scales in hopes to make it to the scoreboard, but unfortunately none would meet the tournament minimums, leaving the board wide open for the final day of the tournament. While the crowds continued to wait anxiously for another day at the weigh stations, the nightly dockside atmosphere was filled with fish stories from the action packed day on the water.

With 6 boats fished out it left 41 teams to make some magic happen on the scoreboard. Saturday’s forecast turned out to be the windiest of the 3 available fish days, which added to the anticipation at the weigh station. While the conditions were sporty, the remaining fleet found more makos than the prior days. Yet, it was the appearance of the Relentless crew to the weigh station that made the impact to the scoreboard. Halfway into afternoon of weigh-ins their 435 pound thresher set the bar for the heaviest shark across the board. While the majority of the boats reported hook ups and release the tournament concluded with the Relentless as the payout winner of the tournament.

As the event turned out to be busy with over 100 releases, the points categories were all filled. 3rd Most Points Mako went to Rob Kurian and his crew on the Saltlick with 800 points total. 2nd Most Points Mako, which was a tie broken by time, was awarded to Kyle Denny and the team of the 38 Special with 800 points. Most Points Mako was taken by Val Fichera of the Warden Pass as he and his crew accumulated 1000 release point in total. The big winners of the night went to Frank Gripp, Captain Joe Cunningham, and the team of the Relentless as they cleaned out the purses in the Overall, Daily Double, and Under 35’ calcuttas for heaviest shark with a total payout of $88,642!

Marlin and Tuna and Mahi Oh My!